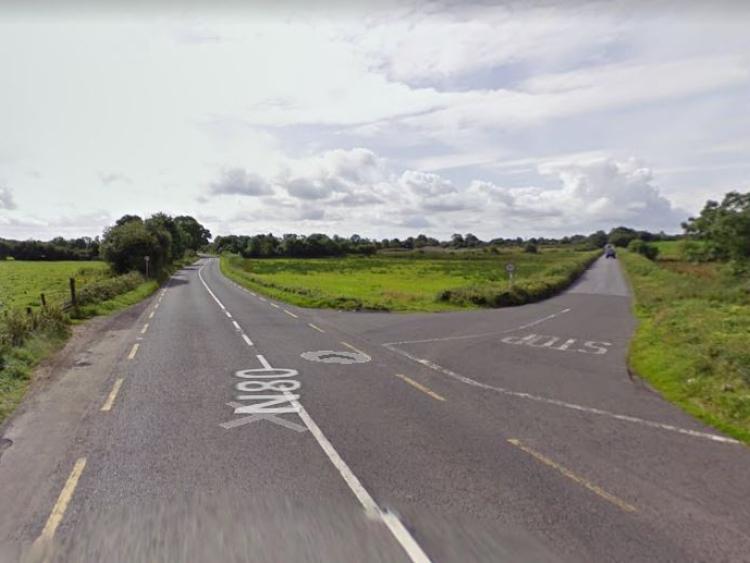 Nyra junction on the N80 between Tullamore and Mountmellick prior to 2017 works. Google maps.

A junction on the busy N80 road through Laois needs further work after 'extensive' work was carried out on it in 2017.

The Nyra junction on the N80 outside Mountmellick on the Tullamore Road is used by many vehicles everyday to bypass Mountmellick via Camira.

Senior Engineer at Laois County Council, Mr Farhan Nasiem, said that ‘extensive’ works were carried out at the junction in October 2017.

“The N80 Nyra junction was identified by Laois County Council in 2017 as requiring a road safety upgrade.

“The Nyra turn off is used frequently by vehicles as an alternative to going through the town of Mountmellick which has on street parking as well as two severe ninety degree bends.

“The N80 has upwards of 8,000 vehicles per day through Mountmellick. There two issues combined to slow movements through the town, leading to vehicles using the R422 to Mullaghanard cross and the L2095 to Nyra as an alternative,” he said.

“Vehicles coming from Tullamore and turning right were vulnerable due to limited sight distance in advance and the speed of approaching vehicles.

“There have been numerous accidents at this location with four accidents over the last 18 months prior to the upgrade,” he said.

Ditches and trees were taken out to improve sight distance at the junction and a new fence was installed.

When the road was resurfaced in 2017, a passing bay was installed without hard shoulder as per Transport Infrastructure Ireland Publications.

Cllr McDonald said it was great to have such a detailed response from the council on the work carried out at the cross last year.

“The main problem is that there is a family near the cross who have no view coming out onto the road.

“They would be in a position to take the ditches out themselves if they had help with traffic management from the council,” he said.