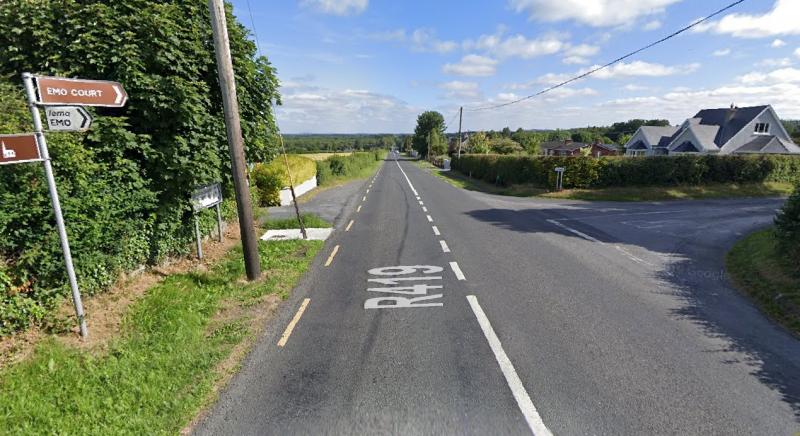 Portarlington to Portlaoise Road at Emo

A promise to deploy speed vans to Emo on the busy Portlaoise to Portarlington road has not been delivered according to a councillor who says a van crashed into the front garden of a house on the stretch where he said it’s accepted traffic must be slowed.

Cllr Aidan Mullins, Sinn Féin, raised the issue with Laois County Council in a motion calling for traffic controls at the Killimy junction.

He told the Graiguecullen Portarlington Municipal District meeting that there there have been several accidents and near misses at the junction mainly caused by traffic coming at speed from the Portlaoise direction.

Cllr Mullins said the risk of a crash is heightened when somebody is turning right for Emo village or to head visit Emo Court. He said the most recent incident involved a van.

“The van went straight through a ditch into the front garden of a house right into children’s goal posts into the garden. It’s a serious issue and must be addressed” he said.

Cllr Mullins said he had met with residents and a council official to examine what the local authority could do to help but he added that action had been promised by gardaí nearly two years ago.

He said the guards gave a pledge to former councillor Tom Mulhall at a Laois Joint Policing Committee in November 2019. Cllr Mullins said the minutes of the meeting state that the Gardaí confirmed to councillors and TDs that the location had been included in the list of zones GoSafe Van for speed monitoring. He added the vans were due to go into action at Kilimy in early 2020.

He asked if the Local Authority could intervene to ensure the vans are deployed.

Three vehicles seized at one garda checkpoint near