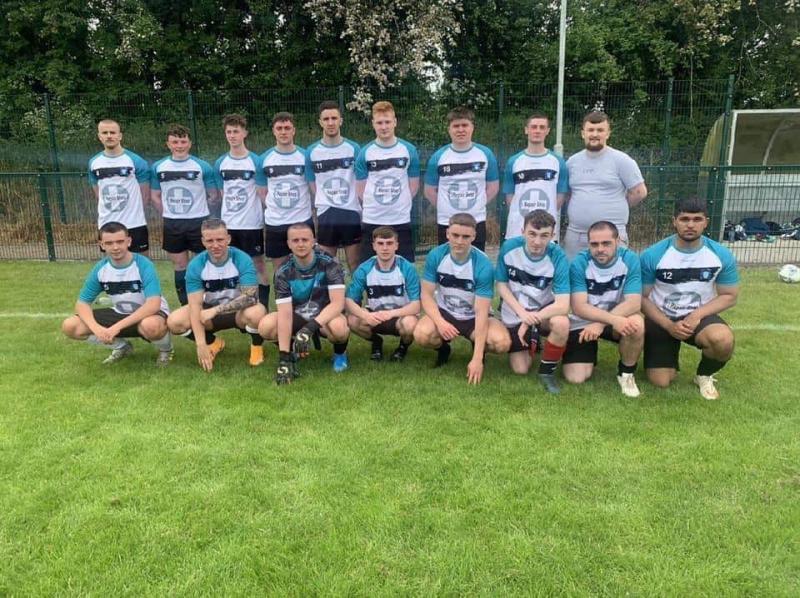 Portlaoise Rovers, a newly formed soccer side, got their cup campaign off to a terrific start as they comfortably saw off Mountmellick Utd’s ‘C’ team to pick up some early points in group 1. Rovers are in a six-team group with both Mountmellick Utd ‘A’ and ‘C’ teams, Abbeyleix Athletic, St Aengus and Stradbally Town ‘A’.

The away side started brightly on Sunday morning in Mountmellick, as they strung together some nice passing plays. Mountmellick Utd held their formation though and made it difficult for them to carve out any chances early on.

Portlaoise Rovers found the back of the net after ten minutes thanks to their main man Brian Smith. The midfielder received the ball in the middle of the park and there did not appear to be any danger from a Mountmellick Utd perspective. However, Smith went on a driving run before rifling a shot into the top right corner of the goals, giving the Mountmellick Utd keeper no chance.

The game was more open after that as Mountmellick knew they needed to score and there was more space in behind for Portlaoise Rovers to exploit. Jamie Shinners saw his long-range shot drift narrowly wide of the goals, while striker Alan Roberts also forced the Mountmellick Utd keeper into action.

Portlaoise Rovers full backs weren’t afraid to burst forward, as both Gavin Cooper and Will Boland managed to whip in some dangerous deliveries that Mountmellick Utd did well to clear. The home side had their first big opportunity towards the end of the first half, as their striker went through on goals but could not convert.

The start of the second half was a tense affair, as both sides did not want to make any mistakes that would prove costly. Mountmellick attempted to get in behind the Portlaoise Rovers defence, but centre-back duo Ross Holmes and Ronan Corr dealt very well with those threats and snuffed out the danger.

Conor McKenna came on for Portlaoise Rovers at around the 60’ minute mark, and the substitute made an immediate impression. Conor Dwane won the ball back in midfield and picked out McKenna, and he sent a bullet into the top corner to give Portlaoise Rovers a two-goal cushion.

Portlaoise Rovers did not let up once that goal went in though, and the third arrived shortly after. Brian Smith was on target again as he struck a shot in off the crossbar and the contest looked sown up at this stage.

Mountmellick Utd, to their credit, continued to battle in midfield and made it difficult for Portlaoise Rovers to play their passing game. Smith did nearly grab a third goal though, as after Jamie Shinners was fouled close to the box, Smith stepped up to send the free narrowly wide of the Mountmellick goalpost.

Portlaoise Rovers fired in a fourth goal with around fifteen minutes left to play. Winger Aaron Keane got on the end of a cross at the back post and headed it into the net.

Smith did complete his hat-trick at the end of the game, as he went through on goal and calmly slotted it into the corner to cap off an excellent first competitive display for Portlaoise Rovers.