PJ Scully shot the lights out with 17 points 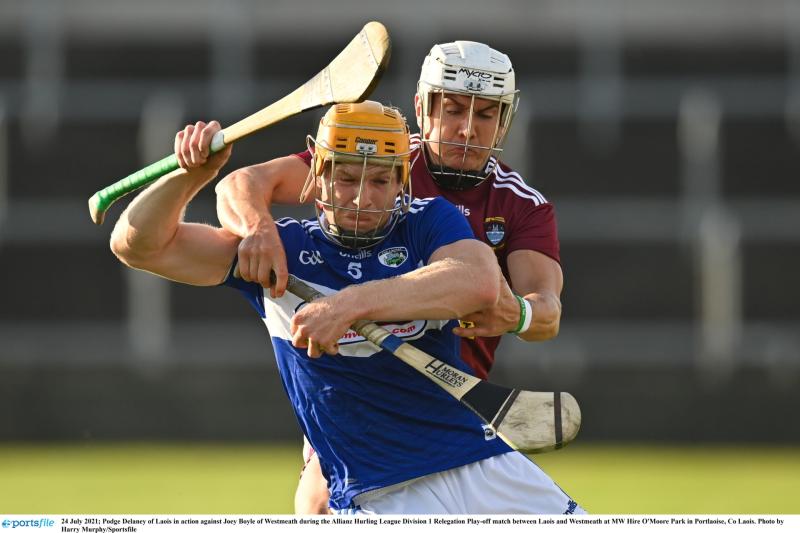 Laois saved their Division 1 hurling league skin on Saturday night as they won a pulsating relegation battle with Westmeath. Laois trailed by six points with 16 minutes to go but a spirited last quarter saw the Laois men prevail with PJ Scully the man of the moment with 17 points.

It was a hugely spirited display that saw them come back from the brink on more than one occasion with survival in the Leinster championship and the top tier of the league now secured.

The game started off at a blistering pace with Paddy Purcell taking just 15 seconds to open the scoring. Niall O'Brien wated little time in replying but Laois stole a march and hit the next three scores, two from Cha Dwyer and the other from PJ Scully who could have had a goal but his shot blazed over.

Killian Doyle and PJ Scully traded dead balls and Laois looked in good shape leading 0-5 to 0-2 after 10 minutes. Westmeath were about to find their groove though and with Niall O'Brien looking sharp in the full forward, Killian Doyle landing the frees and Aonghus Clarke landing a monster score from his own half back line, Westmeath worked themselves into a 0-6 to 0-5 lead.

Paddy Purcell then saw his shot saved by Noel Conaty in the Westmeath goals before Scully and Killian Doyle traded points to leave Westmeath 0-7 to 0-6 in front on 16 minutes.

Before the water break, Westmeath stretched their lead with two Killian Doyle frees leaving them 0-9 to 0-6 in front. Westmeath picked up where they left off before the water break and two long range scores from Killian Doyle and Niall Mitchell pushed them out to an 0-11 to 0-6 lead on 21 minutes and after Laois had started so well, they now looked in a spot of trouble.

Laois were rattled with the Westmeath energy and were making basic mistakes. Westmeath were all too happy to punish them and it took a PJ Scully point in the 26th minute to bring to an end a run of 10 scoreless minutes but it meant Westmeath were now 0-14 to 0-7 in front.

The score went to 0-16 to 0-8 on 29 minutes but a minute later, Laois got themselves back into the game. Charles Dwyer shot dropped short and as Ross King and Noel Conaty contested the high ball, it broke down and King tapped in to the empty net to leave it 0-16 to 1-8 with five minutes left in the half.

Enda Rowland was called on down the other end to make a superb save from Davy Glennon but Doyle did convert the '65'. It was all action now and just before PJ Scully popped over a free, Westmeath wing back Aaron Craig was shown a straight red card for an incident off the ball with Charles Dwyer.

Ciaran Doyle landed the last score of the half and after a frantic 35 minutes, Westmeath led 0-18 to 1-9 at the break.

Laois got a great start to the second half with three points in a row from PJ Scully, Charles Dwyer and well taken effort from Wille Dunphy to bring the deficit back to three points. Westmeath found their feet again with the double act of Niall O'Brien and Killian Doyle once again leading the charge as they opened up a 0-22 to 1-14 lead.

Derek McNicholas pointed with his first touch after coming on and it was Westmeath who looked like they had the extra man with players popping up everywhere. Niall O'Brien landed his sixth point from play just before the second half water break as Westmeath Westmeath 0-24 to 1-15.

Laois came out a different animal after the water break and with six unanswered points, they were level by the 62nd minute with the immense PJ Scully landing five and the other a glorious score from Ross King.

Now level at 1-21 to 0-24, Scully drifted over another free to put Laois in front with seven minutes to play. Derek McNicholas levelled again straight away as a gripping final stage began to unfold.

Ross King and Kevin Regan exchanged scores as they remained deadlocked with two minutes to go. Willie Dunphy then put Laois in front but a minute later he was sent off for a second yellow card.

As the game entered five minutes of injury time, Laois looked like they had it won with two Jack Kelly points but there was more drama when Davy Glennon was fouled for a Westmeath penalty.

Derek McNicholas took it but his effort blazed over and that proved to be the last score of the game as Laois held on to win by two points.