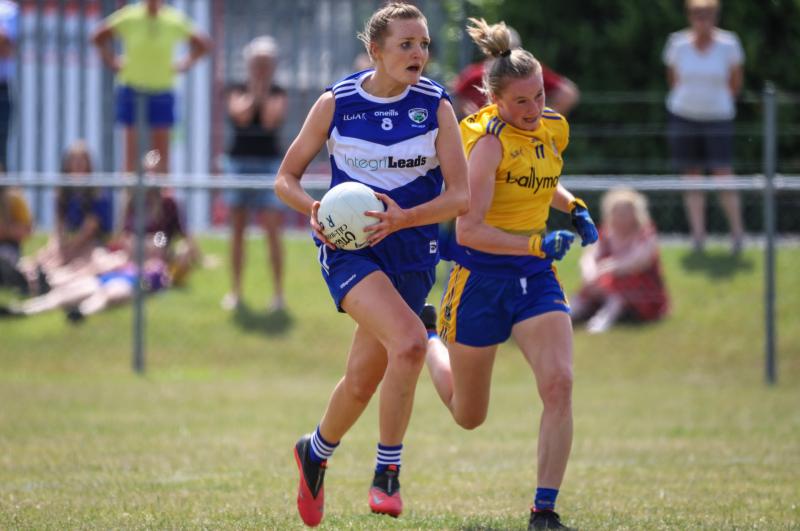 At the start of this year’s TG4 LGFA Intermediate championship, the general consensus was that Westmeath were out in front of the pack due to their experience in Division One of the league, and losing last year’s final. At the other end of the scale, there were a handful of teams like Fermanagh, Offaly and possibly Louth who were expected to struggle, with not much to call between all the rest.

After winning Division Three and following up with two good wins over competitive opposition in the championship, while Westmeath had a few hiccups before finally securing their progression, suddenly now Laois are seen as potentially joint favourites in some people’s eyes.

Manager Donie Brennan isn’t shirking away from that, saying that he’s quite happy to see the public show some belief and faith in his group of players.

“I suppose we have a huge following now, people want to know about this Laois team and there is great excitement” he told the Leinster Express after Sunday’s game in Kinnegad.

“Isn’t it better to have the expectation there? It means that we are winning matches, that we’re going well, that we’re in the right position. We’ve put ourselves in that position by training hard, through players buying in and listening, and doing what they are told.

“We will probably go in as favourites (against Louth) and deserving favourites after winning Division Three, after beating Roscommon and Kildare. People were putting it up to be a hard group but we’ve won the two matches in it. I don’t think (favourites tag) will be a factor for us”.

The Arles-Killeen man praised his players for their attitude and conditioning on the day, and was particularly happy with how they controlled the kickout, and adapted to the fact that they didn’t get their usual lucrative haul of scores from Mo Nerney in front of goal.

“The kickout is huge in the ladies’ game, especially if you don’t win your own you’re under pressure straight away. That’s something we put a great focus on and I’m sure every team does. Today it worked out.

“Gaelic football is not rocket science, you have to work hard and make those hard runs. You have to be prepared to track back as well. That’s what we expect.

“Mo is a player we trust and we will always work for her. Although she mightn’t have had her best game today, she was still showing and working hard. She was still tackling and that’s what we expect from every player, no matter whether the ball is dropping for them on the day or not.