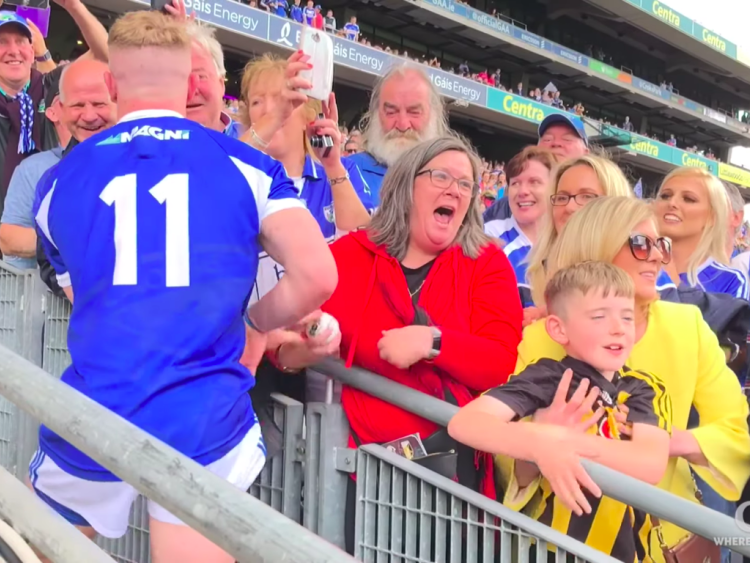 Sunday last was a historic day for Laois hurling as Eddie Brennan's side captured the Joe McDonagh Cup, defeating Westmeath to lift the county's first ever cup in Croke Park.

Yesterday the GAA released a brilliant fly-on-the-wall style video of Laois' victory which gave an alternative view of how Sunday's game unfolded along with some up close celebration shots.

Eagle-eyed viewers of the video highlighted an encounter that you may have missed involving Laois' main-man on the day, Mark Kavanagh, who shot twelve points for Eddie Brennan's side in an impressive display.

The Rathdowney-Errill man is videoed walking up the steps of the Hogan Stand on his way to lift the Joe McDonagh Cup, and along the way he stops to hand his mother, Ann, the match ball - much to her delight - in a precious moment.

From washing dirty shorts, socks and jerseys to driving the length and breadth of the country to support their children’s dreams, mammies are an essential cog in the system that keeps GAA at the heart of Irish community.

They often go unrecognised for their efforts so it's nice to see Mark acknowledge all her years of sacrifice, and you can see the delight on her face as she quickly puts the sliotar safely in her handbag

At 2.18 @Mark_kav7 hands the match ball to his Ma as he walks up the steps. She described it to a few of us later on. So class that someone papped how feckin delighted she is!! #honleix #laoislaoislaoislaoislaois https://t.co/UcPqwJVsCT