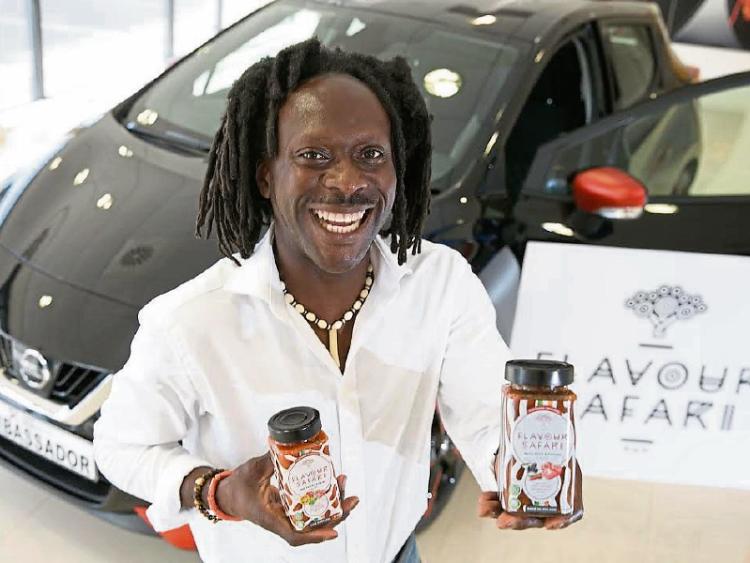 An ambitious Laois man whose journey across Africa inspired him to create and award winning sauce brand is in the driving seat to become a Nissan Generation Next ambassador.

Michael Onalimi from Mountmellick is now just one step away from landing the keys to a brand new taxed and insured Nissan to drive for a year having been named as one of 20 finalists put forward to the public voting stage of the competition.

He was one of almost 1,000 people who applied to the innovative ambassador programme which helps people to follow their dream and to get ahead with the backing and support of Nissan.

“My journey across Africa and Europe was the inspiration behind my brand.

“My sauces not only bring you on a unique taste experience but also tell the story of a flavour journey across two continents,” said Michael.

“The response to Flavour Safari has been phenomenal. Our mild tomato and herb sauce was a favourite with HRH Prince Charles and The Duchess of Cornwall when they tried it during their recent visit to Kilkenny.

“You could say our sauces are fit for a king,” he added.

His success in creating a unique artisan brand has resulted in him being named Best Food Provider at the 2017 Micro Business Awards and as winner of the Bank of Ireland Taste of Dublin Award 2017.

He has also sold out performances at the BBC Good Food Shows in Belfast and London.

Flavour Safari is already a proud Food Academy Producer with Super Valu and Michael is currently working on securing new store listings across the country and on exporting his range of sauces into the U.K..

“I am thrilled to make it through to public voting phase of Nissan Generation Next.

“Every vote counts and I hope that the people of Laois will support me and my business by voting online.

“ I have big ambitions and securing the keys to a brand new Nissan would really help my business to realise its potential,” he added.

Local Nissan dealer, Downey’s Portlaoise, are encouraging everyone to get behind Michael and to vote for him online at www.nissangenerationnext.ie before voting closes on 14th July.

The top seven vote-getters get to become Nissan Generation Next ambassadors, while the judges at Nissan will select the final three ambassadors for 2017.

“Michael exemplifies what Nissan Generation Next is all about. He is fearless about bringing his dreams and ambitions to life and making a success of his business.

“We are proud to support Michael and encourage everyone in Laois to get behind him and to vote for him online,” said Richard Downey, Dealer Principal at local Nissan dealer, Downey’s Portlaoise.