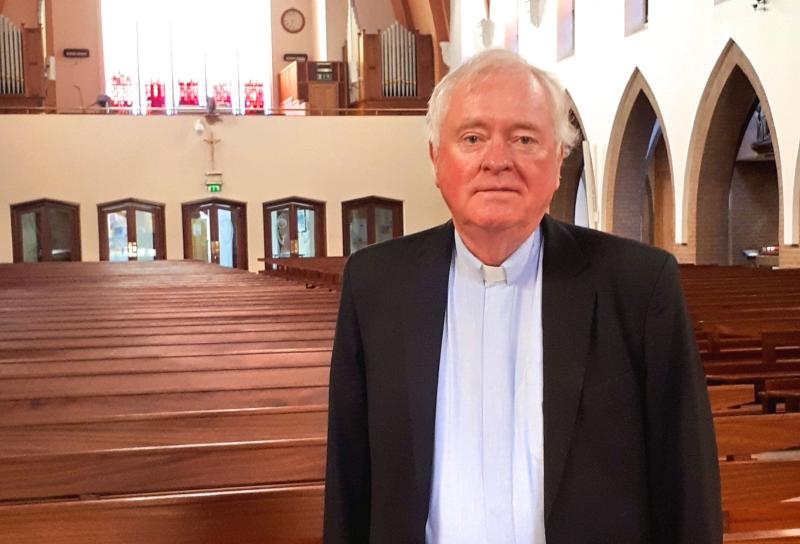 Portlaoise Parish Priest says that the "startling" high Covid figures in the town are the reason for postponing an outdoor Confirmation ceremony.

Monsignor John Byrne said that it has proved to be  "forlorn hope" that the pandemic would have been under control by the end of August.

The parish's confirmation ceremony was to take place on August 28, but yesterday it was announced that it will now take place later on September 18, again led by Bishop of Kildare & Leighlin Denis Nulty.

“Back in June when we set the date for the end of August, coinciding with the young people entering secondary school, we did so in the hope that the pandemic would be much more under control and figures would be improving. Now that has proved to be a forlorn hope, the figures are a bit startling and there is advice that it should be moved to September," Msgr Byrne told the Leinster Express this Wednesday, August 11.

The Portlaoise Local Electoral Area experienced a rapid rise in cases from 58 between July 13 to 26, to 153 from July 20 to August 2. See latest figures in full story below.

There are over 300 children enrolled for Confirmation. The parish had been lucky enough to have confirmed a similar number in 2020 at the end of February, as Msgr Byrne puts it “before we knew what a pandemic meant”.

The almost unique event would possibly still have been within Covid guidelines, with the children and their families in socially distanced groups sitting in the 7,000 seater O'Moore Park stand, and the celebrants and choir gathered on the edge of the pitch.

“Since the Merrion Hotel we are not too sure what the regulations are, it probably would have been within the rules but we just want to give every opportunity to be compliant. The overriding factor is that we do it safely.

“It will be a very historic good celebration, led by Bishop Nulty. It will help if the sun shines," the PP said.

It may well be only the second ever Confirmation ceremony to be held on a GAA pitch, with a ceremony in Nowlan Park in Kilkenny to take place a week before on September 9.

Monsignor Byrne said the idea for the venue came about through discussion with the local schools, teachers and parents, who all agreed it was a safe and interesting option.

“Then we approached the GAA and we had only the height of co-operation, we are very grateful to them,” he said.

On First Communion ceremonies, he is hopeful they will happen after school resumes, and that family celebrations will be held safely.

“The cohort for First Communion ran over from 2nd to 3rd class. As soon as they return to school we will engage with them and we hope to have them by the end of September or early October. We hope to hold them all fairly close together, with less fuss and maybe even more meaningful because of that.

The Government have noted that it’s not so much the communion ceremonies but what happens afterwards. The vast majority of our parisioners are very sensible and I am sure they will organise smaller safer celebrations,” Msgr Byrne said.