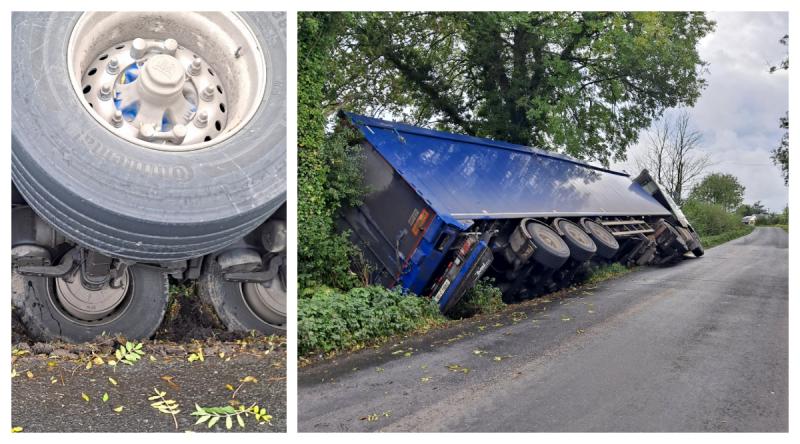 One of the two truck accidents on the road

Laois County Council is being called on to take action at a 'deadly dangerous' road where there have been bad accidents one of which involved a big truck careering into the ditch an incident which it's claimed has made it made it more dangerous.

Hazards on the Skerry road in Rosenallis were raised by Cllr Seamus McDonald, Fianna Fáil, were raised with county council management.

Cllr McDonald called for safety measures as there have been two accidents at this location recently. He highlighted the urgency of action because of a number of accidents in recent months two of which involved trucks.

"One truck turned over with a load of timber...As a result there is a deep drain down. That area needs to be piped to make the road safe.

"One of these days someone is going to be killed. It is so dangerous," he said.

Cllr McDonald added that a local landowner has consented for the necessary works to proceed.

"The road is deadly dangerous. Thankfully nobody was injured but work needs to be done," he said.

In his reply Mr Edmond Kenny, Area Engineer, said Laois County Council would arrange to meet Cllr McDonald at this location to examine the options available to address the safety concerns.

Cllr McDonald welcomed this commitment adding that he looked forward to meeting staff at the scene.