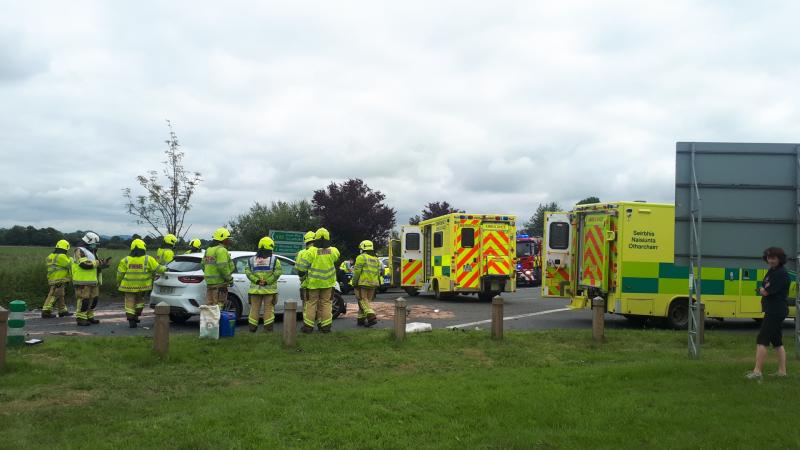 The crash scene on the N80 road near Mountmellick on Thursday, July 8. Photo: Leinster Express

A Laois resident who was assisting on the scene of a serious crash on the main road into Mountmellick this week, has called for rapid road safety works, and underlined the growing need for a relief road for the town.

Fergal Conroy, a Civil Defence officer and candidate in past local elections, fears there will be a fatality on the N80 Portlaoise road beside his home.

“That road has taken the brunt of traffic for the past 25 years since the bypass plan fell flat. There’s more traffic, it’s busier, it’s the main artery to the south east and Mountmellick is one of the bigger towns that still hasn’t got a relief road to take away the traffic. Nothing has been done about that junction.

“It’s a bottleneck, so where else will traffic go but onto that road, I do it myself to avoid the town. But the road is not fit for that traffic. Nothing has been done on it.

“A number of residents on the back roads have complained about the traffic, it’s a rat run between Tullamore and Portlaoise.

“The junction needs measures in the short term, maybe to move the speed limit out further, or rumble strips or road markings. It definitely needs more advance warning from the Portlaoise side, you are coming over a hill into a bend. It needs the verges properly cut.

“As a resident I’m concerned, as a parent of small kids. They can’t go on a bike up the road to visit relatives, they have to go in a car to be safe.

“All the residents are concerned. When I was running for election they all raised it with me, but it all comes back to the TII. They are taking small bends off roads in other places but nothing for this bigger town with 10,000 vehicles going through it a day.

“We have had a number of crashes, with one only last year of a car going into a field.

“This one was more serious, neighbours heard the bang from far away inside their houses. I wish both drivers a speedy recovery, they were very lucky. I call on Laois County Council  and local councillors to do something about the road. It is a piece of major infrastructure that has been neglected. Do something now before someone else is injured or killed,” he said.

Last Thursday afternoon July 8, two cars collided almost head-on at the junction of Derrycloney to the N80, with both drivers taken to hospital by ambulance. Their injuries were not understood to be serious. The road was closed for some hours as multiple emergency crews worked to clear the smashed cars and an oilspill from the crash.